Thank you for your commitment . . .

Thank you for your commitment in joining Iraq Prayer Surge ~ NOW! Your intercession for our troops in Iraq will be the difference. Just as intercession gained brought victory to the Allied Forces in World War II, our prevailing prayers will bring the Holy Spirit into action and God's victory and peace to Iraq.

Here's an encouragement from what happened 67 years ago in Europe:

"You are more responsible for this victory today than those men on the battlefield." Rees Howells spoke these words to his group of intercessors as the British soldiers were about to be destroyed by the Nazis at Dunkirk on May 17, 1940. The Lord heard the cries of Mr. Howells and his intercessors and delivered the soldiers. (Ch. 34 of Rees Howells, Intercessor by Norman Grubb)

There is a mandatory prerequisite before answered prayers. 2 Chronicles 7:14 must be properly applied. In order for us to gain intercession, we must go before the Lord pure and holy. Let us examine this key passage...

"If My people who are called by My name will humble themselves, and pray and seek My face, and turn from their wicked ways, then I will hear from heaven, and will forgive their sin and heal their land."

2. We must HUMBLE OURSELVES.

5. We must REPENT (turn from our wicked ways)

Then, let us first of all AS ONE CHURCH, TURN FROM OUR SINS, WAIT UPON THE LORD AND PRAY WITH HUMBLE HEARTS.

Our soul waits for the LORD; He is our help and our shield. For our heart shall rejoice in Him, because we have trusted in His holy name. Let Your mercy, O LORD, be upon us (& our military). just as we hope in You. Psalm 33:20-22

Posted by Prayer Surge NOW! at 8:53 PM No comments: 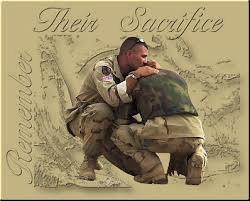 URGING CHURCHES ACROSS AMERICA TO:
*Observe a moment of silence for our 3600 fallen soldiers
*Earnestly pray for our soldiers presently on duty in Iraq and their families

"No king is saved by the multitude of an army;
A mighty man is not delivered by his strength.
A horse is a vain hope for safety;
Neither shall it deliver any by its great strength.
Behold the eye of the Lord is on those who fear him,
On those who hope for His mercy."
Psalm 33:16-18

After many military setbacks in 2006, on January 10, 2007, President George W. Bush addressed our nation and announced a major shift in the war against terrorism in Iraq. The center piece of this new plan was the ordering of more than 20,000 additional troops to Iraq. This war strategy has become known as "Troop Surge." It holds promise of securing Bagdad, Fallujah and Al Anwar from terrorist attacks and giving Iraq’s new democratic government a chance to succeed.

The Word of GOD makes it clear, victory in Iraq and Afghanistan will not come through the increase number of soldiers and latest weapon systems. This critical war will be won if His people fear Him and hope in His mercy. Without a significant PRAYER SURGE, our troops will return from the Middle East in defeat and we will have to face the terrorists in our own neighborhoods.

Our military is only as effective as our intercession is for them. As our brave soldiers fight in Iraq and Afghanistan, we must battle for them on our knees. The future of America, the Middle East and the rest of the world is at stake. Without peace in Baghdad there will be no peace in Jerusalem, Washington DC or in your own hometown.

Last November proved to be a huge defeat for those of us seeking Biblical standards in America. Many godly agendas came to a halt as millions voted out several of our key congressional leaders who stood with our President on the war, life issues and traditional marriage. Without decisive victories over the terrorists gathered in Iraq our nation will slip into great peril. What happens there this summer will determine the destiny of America.

Memorial Sunday, May 27th is an ideal day to kick off this PRAYER
SURGE. Pastors throughout America are asked to lead a moment of silence for our 3600 soldiers who made the ultimate sacrifice in Iraq and also to lead their congregations in prayer for those who are currently serving us in Iraq. Please encourage your members to pray everyday for our soldiers and their families.

May this 100 days between this Memorial Day Sunday and Labor Day deepen our prayer lives as we call upon the LORD to bring a desperately needed victory in Iraq. Even if GOD gives us substantial progress in the coming 100 days, we must then go deeper into intercession as we press on for a full victory and the return of our troops home. Let us live out 2 Chronicles 7:14 and approach GOD'S throne of grace on behalf of our President, generals, and soldiers who are willing to lay down their lives for us.

"Therefore I exhort first of all that
supplications, prayers, intercessions, and giving of thanks
be made for all men, for kings and all who are in authority
that we may lead a quiet and peaceable life
in all godliness and reverence."
1 Timothy 2:1-2
Posted by Prayer Surge NOW! at 8:23 PM No comments:

Prayer Surge Welcomes You to Intercede

Prayer Surge is dedicated to calling forth the Body of Christ to STAND IN THE GAP on behalf of 156,000 American troops and the millions of Iraqis. Will you join us in praying and inviting others to do the same?

The recent Troop Surge is not the answer unless we invite the Holy Spirit to bring God's victory, peace and security in Iraq. This not about USA versus Iraq or Christians versus Muslims. It is about God restoring His rule in this ancient land and bringing revival to our land. Let us approach the throne of grace in the spirit of 2 Chronicles 7:14!
Posted by Prayer Surge NOW! at 5:50 PM No comments:
Newer Posts Home
Subscribe to: Posts (Atom)